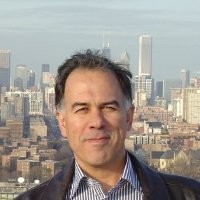 Περίληψη Ομιλίας:
4G, 5G and Cognitive Radio networks employ Smart Antenna Systems. These use the additional degrees of freedom offered by their multiple antennas to exploit, among other things, multipath in the propagation environment. So, by construction, design of such systems cannot be assessed by simple performance metrics such as antenna gain, polarization and efficiency alone. At a minimum, performance has to be considered in the context of the nature and degree of the multipath as well as the types of smart algorithms that are employed during their operation in the field. Capacity, the maximum possible achievable throughput, is an appropriate performance metric when the antennas are properly combined with their propagation environment but nothing more is known about the system. When, additionally, the specific protocol characteristics of the system are taken into account, the actual throughput of the communication link becomes a more appropriate performance metric. A Cross-Layered design approach of Multiple Input Multiple Output (MIMO) antenna systems is presented in this talk. An electromagnetics exact formulation from baseband-to-baseband of a Smart Antenna System is given. The formulation consists of full wave analyses of the antenna arrays involved on both sides of the link and a plane wave decomposition for the propagation environment. Subsequently, the baseband signals are fed into link simulators, specific for each system of interest, to provide estimates of the Bit Error Rate (BER) and throughput. Illustrative examples of the methodology will be given for WiFi and cell phone designs. The new Test Plans for MIMO and Transmit Diversity Over-the-Air Performance will also be discussed in the context of this antenna system design approach.

The Challenges of 5G with its proposed massive MIMO antenna systems are discussed, especially as they relate to the benefits and necessity of the Cross-Layered design approach outlined above. Cognitive Radio Spectrum Sharing approaches and Dynamic Spectrum Access algorithms are also discussed. The talk ends with recommendations on research topics to farther the state of the art.

Short CV:
Nick Buris received the diploma of Electrical Engineering in 1982 from the National Technical University of Athens, Greece and the Ph.D. in EE from the North Carolina State University in 1986. In 1986, he was a visiting professor at NCSU working on space reflector antennas for NASA. In 1987 he joined the faculty of the ECE dept. at UMass, Amherst. His research work there focused on microwave magnetics, broadband phased arrays and tunable arrays printed on ferrite substrates. In 1990 he was a summer faculty fellow at the NASA Langley Research Center working on an ionization (plasma) sensor for an experimental reentry spacecraft. From 1992 to 2009 he held various leadership positions at Motorola Labs. He has worked and managed large projects on antenna product design, RF propagation measurements, RFID’s, mm wave systems and the development of proprietary software tools for electromagnetics, wireless system design and multidisciplinary optimization. In 2009 he founded NEBENS, a consulting company focusing on cross layer design aspects (antenna, coverage and algorithms) of Smart Antenna based wireless systems as well as spectrum management and coexistence algorithms for Software and Cognitive Radio systems. NEBENS recently developed and commercialized MIMObit, a software tool based on its core competence. Since December 2017, Nick is also a professor at Shanghai University building a research program on various aspects of advanced wireless communication systems. Nick is an IEEE fellow and has served the IEEE, CTIA and the TIA by participating in and/or chairing various of their technical program and standards committees.