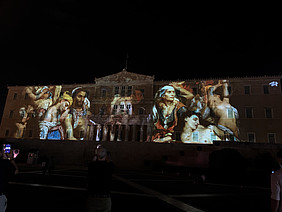 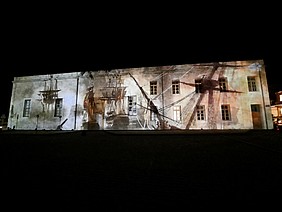 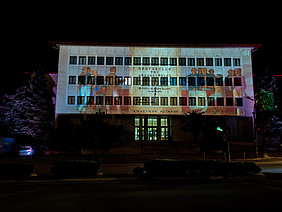 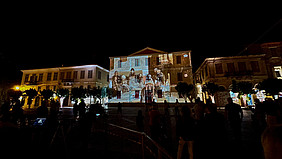 On the weekend of June 12 and 13, the Greek Revolution "came to life" throughout Greece as a central event of the "Greece 2021" Committee. "DESIRE FOR FREEDOM" was screened on iconic buildings of 18 cities, using the technique of projection mapping, showing a visual narrative of the Struggle of 1821 through relevant works of art. The projections took place simultaneously on the facades of the 18 selected buildings, with the Hellenic Parliament building in the lead. In addition to the history of the Revolution, the projections also address the modern history of each city. It is the most significant mapping project ever attempted in Greece.

The production of the artistic narrative of the material and its adaptation on the buildings was executed by theTransformable Intelligent Environments Laboratory (TUC TIE Lab) of the School of Architecture of the Technical University of Crete.

The Municipalities selected the buildings, and the "Greece 2021" Committee closely collaborated with the local governments for the project's necessary groundwork.

The visual content was accompanied by an original musical composition, and the projections were further enhanced by an installation of atmospheric lighting in the surrounding area.

The "secrets" of an innovative visual narrative

The projection's focus is the narration of the Revolution of 1821, starting in the pre-revolutionary years and concluding with the establishment of the modern Greek State.

The material that composes the visual narrative derives from paintings and other documents such as books or official reports. In particular, more than 300 engravings and paintings from Museums, Municipalities, and private collections in Greece and abroad were used for its development, while the artistic segments of the work were created through a unique procedural approach by the TUC TIE Lab called visual layering, which "gives life" to works of art, adding depth, movement, and sound, using the technique of animation.

This way, during the screening, the viewer has the opportunity to see depictions of life in Greece before the Revolution and follow the events that led to the outbreak of the Struggle, such as the establishment of the Friendly Society or the uprising in Moldova and Wallachia; to watch a series of fictionalized defining moments of the Struggle, such as the Battle of Dervenakia or the Exodus of Messolonghi, and to learn about the first National Assemblies, Philhellenism and the London Protocol of Independence.

The projection of the artistic narrative was adapted to the particular dimensions of each building, taking into consideration, in addition to its height, length and width, many other aspects, such as openings, materials and surface textures, lighting conditions, etc.

The narrative of the Revolution in a digital application, too.

About a month after the screenings, a digital application will begin operating, which, via augmented reality, will enable citizens and visitors of the 18 cities to watch the audiovisual narrative using their mobile phones or tablets. In particular, after installing the free-of-charge application on his device, each user will be able to watch the project by standing in a specific spot in front of each building and aim at the façade with the device's camera. At the same time, through the application, the user will have access to a plethora of information on the Projects and Events of the "Greece 2021" Committee. The application will be available for mobile phones and tablets, Android and iOS, in Greek and English.