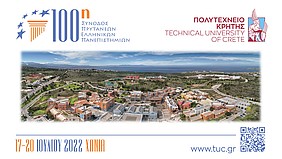 The Chairs with the leadership of the Ministry

The Chairman and the Minister of Education 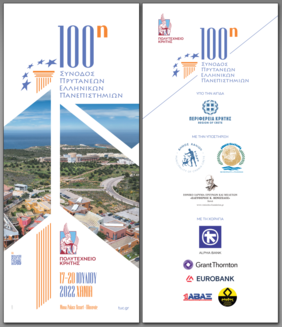 The 100th Assembly on the news of Kriti TV

The 100th Assembly on the news of Nea TV

The anniversarial 100th Assembly of the Rectors of Hellenic Universities was successfully organized by the Technical University of Crete from 17 to 20 July 2022 at the Minoa Palace Resort Hotel in Platanias, Chania under the auspices of the Region of Crete, with the support of the Municipality of Chania, the Municipality of Platanias and the National Research Foundation "Eleftherios K. Venizelos", but also through the kind sponsorship of many partners (Alpha Bank, Grant Thornton, Eurobank, AVAX, Romvos, Asteriadis SA).

With the participation (in person or via teleconference) of the full assembly of the Rectorates of Hellenic Universities, as well as the Heads of University Research Funds Units and other organizations from around the country, as well as with the presence of the leadership of the Ministry of Education and Religious Affairs, the 100th Rector's Assembly was a pivotal event in view of the implementation of the new legislative framework, since issues related to (under)funding, energy costs and (under)staffing of Hellenic Universities were discussed in depth, as well as the need to draw up a "road map" for a smooth transition to the next day.

On July 19, 2022, the 100th Assembly of Rectors of Hellenic Universities was held with the participation of all Vice Rectors, which was opened by the Deputy Regional Governor of Chania Mr. Nikolaos Kalogeris, the Mayor of Chania Mr. Panagiotis Simandirakis and the Mayor of Platanias Mr. Ioannis Malandrakis. The Rector of the Cyprus University of Technology and Chairman of the Assembly of Rectors of Cypriot Universities, Professor Panagiotis Zafeiris, also addressed the audience; his participation was of key importance, since he transferred the experience and know-how of the Universities in Cyprus to the topics discussed. During the day, invited talks were delivered by Dr. Eva Sachini, Director of the National Documentation Center, Prof. Em. Michael-Marios Scoullos of the National and Kapodistrian University of Athens, Prof. Athanasios Kyriazis, Secretary General of Research and Innovation, as well as Dr. Christina Besta, Director General of the Hellenic Authority for Higher Education (HAHE) on behalf of the President of HAHE, Prof. Pericles Mitkas.

The Assembly concluded on July 20, 2022 with the 100th Assembly of the Rectors of the Hellenic Universities with the participation of the Vice Rectors of the Chairing Universities, in which the Minister of Education and Religious Affairs Niki Kerameos, the Deputy Minister Angelos Syrigos and the Secretary General Apostolos Dimitropoulos also participated in person. The Minister listened attentively to the recommendations and questions of the Rectors, as presented by the Chairman of the Assembly and Rector of the Technical University of Crete, Prof. Evangelos Diamantopoulos, who focused on three main axes: (a) underfunding, (b) energy costs, (c) (under)staffing. Also, emphasis was placed on the new University administration model and the need to draw up and communicate a "road map" for the implementation of the new law. Among the issues that the Minister addressed were the academic environment and the implementation of the new law. Emphasis was also placed on the issues of extroversion and collaborations with International Universities, where the Minister announced that, after the delays of the pandemic, an important meeting has been planned for the next period with the aim of opening a channel of communication of the domestic Higher Education Institutions with a mission of 30 leading and Ivy League American Universities, which will visit Athens, but will also visit Universities outside Athens during their visit.

The Assembly was complemented by visits to the New Archaeological Museum of Chania, the House-Museum of Eleftherios Venizelos, as well as the Technical University of Crete Campus in Akrotiri. The members of the Assembly had the opportunity to enjoy the Cretan cuisine through the offered lunches and dinners, as well as the Cretan musical tradition and the Cretan dances at the Cretan evening organized at the Orthodox Academy of Crete.

The anniversarial 100th Rectors' Assembly was commented with the best words by all participants. The Rectorate of the Technical University of Crete (TUC) would like to thank and congratulate all members of the TUC staff who worked with professionalism and dedication towards perfecting the organization of the 100th Rector's Assembly!