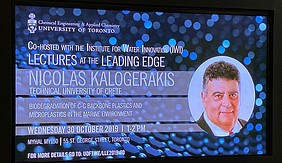 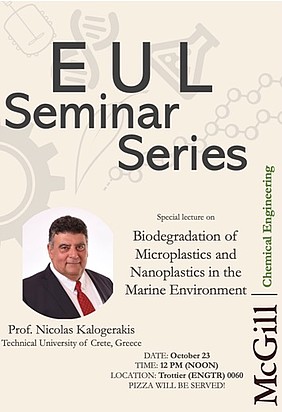 The one-hour public presentation was part of the 'Lectures at the Leading Edge'whichenhance University of Toronto’s culture of excellence by providing a rich view of the broad landscape and far-reaching horizons of chemical engineering and applied chemistry education and research.The lecture was co-hosted with the Institute for Water Innovation (IWI).

The highly popular presentation by Professor Kalogerakis was on Biodegradation of C-C Backbone Plastics and Microplastics in the Marine Environment. The breakthrough research conducted at TUC on the biodegradation of marine plastic debris attracted scientists from several other faculties as the biodegradation of polyethylene and polystyrene plastics (the main type of plastics in the marine environment) has been considered as nearly impossible. The pioneering findings were reported in the several recent journal publications (see most downloaded articles in the journal of Hazardous Materials) and were reproduced by social media (PlumX metrics).

In addition, on October 23, 2019, Professor Kalogerakis was invited as a distinguished lecturer at McGill University in the Department of Chemical Engineering 'EUL seminar series' where he presented the problem of microplastics and nanoplastics in the marine environment.