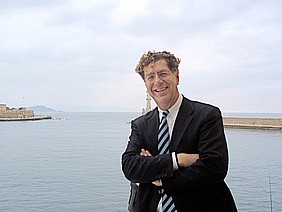 Costas Synolakis, Professor of Natural Hazards at the School of Environmental Engineering at the Technical University of Crete was elected on 17 March 2016 as the 45th member of the Academy of Athens, which is the only National Academy of Greece.

Costas Synolakis’ research studies the impact of natural hazards, and particularly tsunamis and extreme flooding events on beaches. He has done participated or led 30 scientific expeditions in 21 countries, practically in all of the world’s oceans and seas. In particular his work in Papua New Guinea, Vanuatu, the Aleutian islands, the Marquesas, Sri Lanka, the Maldives, Kenya and Oman is highly cited. Five TUC students have participated in field expeditions in the Solomon Islands, Java, the Mentawais, Easter Island, Juan Fernandez,

Samoa, Peru and Chile, while tens have participated in field work for paleo-earthquakes and paleo-tsunamis in the Aegean.

Professor Synolakis with his PhD students at the University of Southern California and the Technical University of Crete developed   the computational suite of codes MOST which is in operational use by the warning centers of the National Weather Service of the US. Since 2013, all tsunami flooding forecasts in the US are based on MOST. The same model is now in use by the National Observatory of Athens to aim in tsunami forecasts in the Mediterranean.

Professor Synolakis and his students developed the theoretical models which explain why sometimes tsunamis cause the shoreline to retreat first before advancing, while other times the shoreline advances first, as the tsunami arrives. Further, he explained first the differences between landslide generated waves and tsunamis triggered by earthquakes. Among others, this research was applied in understanding the impact of the Bronze Age eruption of the Santorini volcano to the Minoan civilization in Crete. His most recent research involved the tsunami generated by a recently discovered Bronze Age earthquake in Rhodes, joint work with the University of Oxford and the University of Cambridge.

In 2004, Costas Synolakis was elected as Professor at the Technical University of Crete, in the first ever -for Greece- university chair for natural hazards. Since then, the Laboratory of Natural Hazards he founded in 2004 studies extreme events such as earthquakes, tsunamis, fires and the impact of waves on beaches, particularly erosion. The research of the Laboratory and the results it has generated from its nearshore field measurements of wind waves and currents are being now exploited by scientists and engineers in many research centers all over Greece, so as to address the problems of coastal  erosion and extreme marine-related floods.

Professor Synolakis, his students and co-workers, have jointly authored about 110 research papers in peer reviewed journals, including the Proceedings of the Royal Society, the Proceedings of the National Academy of Sciences, Physical Review Letters, Science and Nature, and they have presented about 250 papers in conferences and abstracts in the European Geosciences Union and the American Geophysical Union.

In 2014, he was awarded the Sergey Solovjev Medal by the European Geosciences Union. The EGU medal citation was the following.  «Τhe 2014 Sergey Solovjev Medal is awarded to Costas E. Synolakis for his superb research contributions to tsunami mitigation, combining theory, laboratory experiments, field surveys and the development of widely used numerical codes to improve tsunami mitigation.»

In 2015, he was awarded the Moffat and Nichol Award of the American Society of Civil Engineers. The award citation was the following «Costas Emmanuel Synolakis, Ph.D., M.ASCE has been selected to receive ASCE's 2015 John G. Moffatt-Frank E. Nichol Harbor and Coastal Engineering Award. The selection committee particularly noted the wide adoption of hi contributions for tsunami warning, hazard assessment and mitigation.

Prof. Synolakis is the leading tsunami engineer whose research over the past three decades spans a wide array of topics including: tsunamis, coastal engineering, water wave theory, breaking waves, runup, near-shore processes, seismology, marine geosciences, and volcanism.  He has published numerous highly cited, key papers on these topics. His legacy includes the MOST code (the Method Of Splitting Tsunami model), which has become the standard operational model used for inundation maps along the US Pacific coast. Prof. Synolakis has mentored a generation of students who have themselves become leaders in academia, industry and government. Throughout his career, he has led, driven, inspired, and provided direction to tsunami research and coastal hazards mitigation on a truly global scale. He has organized and led several tsunami survey teams in the last twenty years.»

Professor Synolakis will be the 4th Academician in the 90 year history of the Academy of Athens to hold the Chair of Earth Sciences. This Chair was vacated in 2012 with the passing of the  Professor Nick Ambraseys.