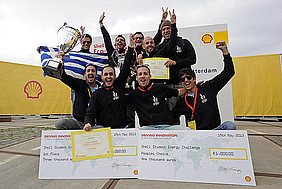 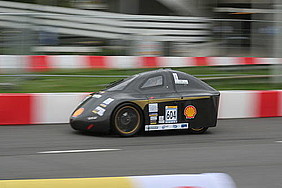 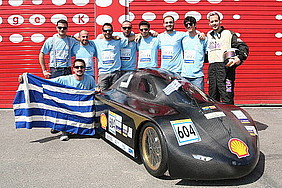 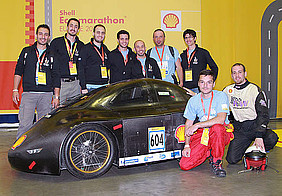 TUCER (TUC Eco Racing) team of the Technical University of Crete, in its sixth consecutive participation, won first prize and the People's Choice award at the Student Energy Challenge in the international fuel saving competition Shell Eco Marathon 2013, that took place in Rotterdam, the Netherlands (15-19/5). The team ranked 4th, achieving its best so far record in fuel consumption (64Km/Kwh) in the competition that gathered 183 university teams from 24 countries.

Shell Student Energy Challenge, this year's new off-track award, asked young engineers to design original infographics on the future of energy. TUCER's entry  showed a well-researched understanding of the energy challenge. The jury especially like the new green technologies proposed and the way the team presented best-case and worst-case scenarios for the future of energy.

People’s Choice Award was decided by over 45.000 visitors of the competition for four consecutive days during a special online vote.

TUCER has won four awards in six years, proving that it is among the best teams of Europe!

TUCer (Technical University of Crete Eco Racing) team has been developing zero emission urban vehicles since 2007. The first vehicle was built in 2008 and until 2012 two more one-seated urban concept vehicles followed. The vehicles are constructed entirely in Technical University of Crete labs and are used as research platforms for the development of innovative automotive technologies. At the same time the team participates in international fuel consumption competitions aiming at high autonomy and safety. In last year's competition, Shell Eco Marathon 2012, the team presented an entirely new vehicle (ER12), which ranked fourth at the category of urban concept cars. The ER12 is the third vehicle manufactured by the group in five years.

So far, the TUCER team has participated in the following competitions:

The basic principle of the contest is simple: to cover the maximum distance while consuming the least amount of fuel. This initiative incorporates values ​​inherent in sustainable development: environmental protection, energy conservation and recognition of individual and cultural diversity.