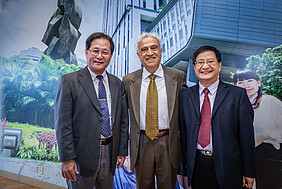 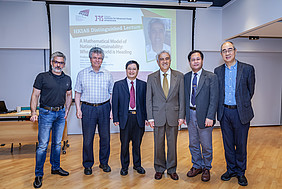 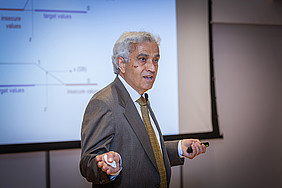 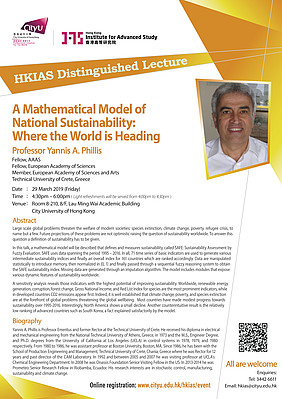 Yannis A. Phillis, Professor Emeritus and former Rector of the Technical University of Crete, was invited at the Institute for Advanced Study of City University of Hong Kong, to present a distinguished lecture titled “A Mathematical Model of National Sustainability: Where the World is Heading”, on March 29, 2019. At the lecture, Professor Yannis A. Phillis, a Fellow of American Association for the Advancement of Science, discussed a mathematical model that defines and measures national sustainability, called SAFE: Sustainability Assessment by Fuzzy Evaluation.

Abstract of the lecture:
Large scale global problems threaten the welfare of modern societies: species extinction, climate change, poverty, refugee crisis, to name but a few. Future projections of these problems are not optimistic raising the question of sustainability worldwide. To answer this question a definition of sustainability has to be given.

In this talk, a mathematical model will be described that defines and measures sustainability, called SAFE: Sustainability Assessment by Fuzzy Evaluation. SAFE uses data spanning the period 1995 – 2016. In all, 71 time series of basic indicators are used to generate various intermediate sustainability indices and finally an overall index for 161 countries which are ranked accordingly. Data are manipulated statistically to introduce memory, then normalized in [0, 1] and finally passed through a sequential fuzzy reasoning system to obtain the SAFE sustainability index. Missing data are generated through an imputation algorithm. The model includes modules that expose various dynamic features of sustainability worldwide.

A sensitivity analysis reveals those indicators with the highest potential of improving sustainability. Worldwide, renewable energy generation, corruption, forest change, Gross National Income, and Red List Index for species are the most prominent indicators, while in developed countries CO2 emissions appear first. Indeed, it is well established that climate change, poverty, and species extinction are at the forefront of global problems threatening the global wellbeing.  Most countries have made modest progress towards sustainability over 1995-2016. Interestingly, North America shows a small decline. Another counterintuitive result is the relatively low ranking of advanced countries such as South Korea, a fact explained satisfactorily by the model.