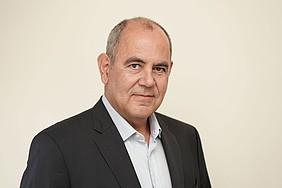 Professor Vassilis Digalakis, former Rector of the Technical University of Crete and newly elected MP of Chania, is the new Deputy Minister of Education responsible for Higher Education issues. He was a candidate in the prefecture of Chania with the New Democracy Party and was elected to the national elections of July 7, 2019 as one of the four MPs of Chania, receiving 7,029 votes.

Vassilis Digalakis received the Diploma in Electrical Engineering from the National Technical University of Athens in 1986 and the doctoral degree in Electrical and Systems Engineering from Boston University in 1992. From 1992 to 1995 he worked as a researcher at Stanford Research Institute (SRI) International in Menlo Park, California. At SRI he developed voice recognition algorithms and patented five patents, while participating in the founding of the world's leading company in speech recognition Nuance Communications. He has also been a member of the board of Dialogos Speech Communications, the first company that deployed automated solutions for call centers using voice technologies in Greece and Turkey.