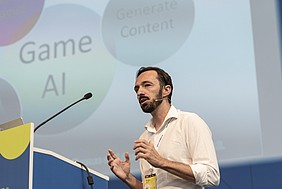 Short Bio:
Georgios N. Yannakakis is a Professor and Director of the Institute of Digital Games, University of Malta, an Associate Professor at the Technical University of Crete and the co-founder of modl.ai. He received the PhD degree in Informatics from the University of Edinburgh in 2006. Between 2007 and 2012 he was an Associate Professor at the Center for Computer Games Research at the IT University of Copenhagen. He does research at the crossroads of artificial intelligence, computational creativity, affective computing, advanced game technology, and human-computer interaction. He pursues research concepts such as user experience modelling and procedural content generation for the design of personalized interactive systems for entertainment, education, training and health. He has published over 260 journal and conference papers in the aforementioned fields and his work has been cited broadly (h-index 52). His research has been supported by numerous national and European grants (including a Marie Skłodowska-Curie Fellowship) and has appeared in Science Magazine and New Scientist among other venues. He is currently an Associate Editor of the IEEE Transactions on Games and was an Associate Editor of the IEEE Transactions on Affective Computing between 2009 and 2017. He has been the General Chair of key conferences in the area of game artificial intelligence (IEEE CIG 2010) and games research (FDG 2013, FDG 2020). He is the co-author of the Artificial Intelligence and Games textbook and the co-organiser of the Artificial Intelligence and Games summer school series.