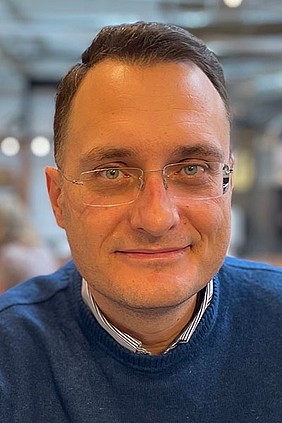 During the Distinguished Lecturer Tour (DLT), speakers address at least three groups in three separate locations within a reasonable geographic proximity to each other. For 2022, IEEE ComSoc will offer the DLT in both online/virtual and in-person formats.

Aggelos Bletsas (Senior Member, IEEE) received the Diploma degree (Hons.) in Electrical and Computer Engineering from the Aristotle University of Thessaloniki, Greece, in 1998, and the M.Sc. and Ph.D. degrees in Media Arts & Sciences from the Massachusetts Institute of Technology (MIT), Cambridge, MA, USA, in 2001 and 2005, respectively. He has worked with Mitsubishi Electric Research Laboratories (MERL), Cambridge, MA, USA and the RadioCommunications Laboratory (RCL), Department of Physics, Aristotle University of Thessaloniki, Greece. He currently serves as a Full Professor with the School of Electrical and Computer Engineering, Technical University of Crete, Greece. His research interests span the broad area of scalable wireless communications and sensor networking, with emphasis on ultra-low power/cost environmental sensing, backscatter radio & RFID, wireless localization and ambiently-powered inference networks. His current focus and contributions are relevant to wireless, batteryless, backscatter sensors for precision agriculture that cost a few Euros, consume a few microwatts and can be read with commodity receivers and smartphones. He has served as a Technical Program Committee (TPC) member for major IEEE conferences. He has served as an Associate Editor for IEEE TRANSACTIONS ON WIRELESS COMMUNICATIONS from 2015 to 2021 and IEEE WIRELESS COMMUNICATIONS LETTERS from 2011 to 2016. He was a co-recipient of the IEEE Communications Society 2008 Marconi Prize Paper Award in Wireless Communications, and various Best (Student) Paper Awards, e.g., in IEEE RFID-TA 2011, IEEE ICASSP 2015, IEEE RFID-TA 2017, MOCAST 2018 and IEEE WCNEE 2021. Prof. Bletsas received the 2012-2013 Technical Univ. of Crete Research Excellence Award. In December 2020, his students won the Second Prize in the 2020 IEEE ComSoc "Communications Technology Changing the World" Student Competition. He is also proud of his students who were winners for two consecutive years of the 2009-2011 and 2011-2012 best Diploma Thesis contest among all Greek Universities on "Advanced Wireless Systems", awarded by IEEE VTS/AES joint Greek Chapter. He is regularly listed in the Top 2% Scientists worldwide annual list compiled by Prof. Ioannidis’ group at Stanford Univ. and has been included in the Highly Cited Greek Scientists, as well as 45 Highly Cited Greek Scientists under 45 list. One of his articles is ranked 1st in Google Scholar Classic Papers in Computer Networks and Wireless Communication.