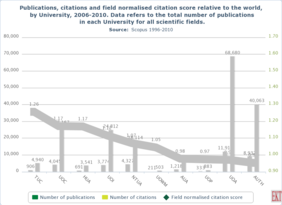 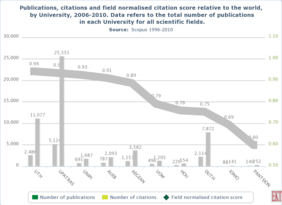 The National Documentation Centre of Greece recently concluded a study titled "Greek Scientific Publications 1996-2010: Bibliometric analysis of Greek publications in international scientific journals - Scopus”, based on data from the internationally established Scopus Database, which aims to create a consistent ground for monitoring and presenting data for the research environment in Greece and thus to enable correlations with levels of research activity in EU and OECD countries.

As far as TUC is concerned, this study reflects the performance of TUC scientific staff and its production of scientific publications as well as the impact of the TUC's research work internationally. TUC ranks first among all universities in Greece in research publications marking the highest citation score and exceeding world average!

With regard to the 5-year period 2006-2010, Figures 4.3.1 and 4.3.2* display the number of publications and citations as well as the relevant “field-normalised citation score” for each University. The field normalised citation score or “citation score” is the relative number of citations to publications of a University compared to the world average of citations to publications of the same time period and scientific subject field. The normalisation was done on an individual article level according to the 329 scientific subject fields. If an article was originating in more than one scientific fields, a mean value of the fields was calculated. The citation score was calculated using software developed by the National Documentation Centre (EKT). A value greater than 1, indicated that the impact of publications was higher than the world average.