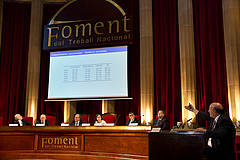 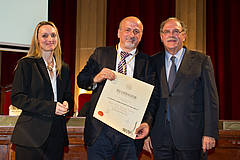 Professor Konstantinos Zopounidis (Technical University of Crete, School of Production Engineering and Management and Audencia Nantes School of Management) has been named for the second time, in less than two years, a corresponding academc of the Spanish Royal Academy of Doctors (Real Academia de Doctors de Espana) on July 10th, 2014.

The Spanish Royal Academy of Doctors is a prestigious interdisciplinary organization with 100 years of history. The title of corresponding academic is the highest distinction bestowed upon foreign members.

Professor K. Zopounidis was awarded the gold metal at a ceremonious conference on the occasion of the Royal Academy of Doctors celebrating its' 100 years.

In 2013, Professor K. Zopounidis was also named an Academic at the Spanish Royal Academy of Financial and Economic Sciences.