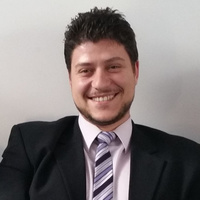 Short CV: Konstantinos N. Gyftakis is an Associate Professor in the School of Electrical and Computer Engineering of the Technical University of Crete, Greece.

He received his Diploma from the Dept. of Electrical and Computer Engineering, University of Patras, Greece (2010) in the Sector of Electric Power Systems.  He then received his Ph.D from the same Dept. (2015) entitled: "Electromagnetic fault analysis in induction motors and development of new methods for their diagnosis". He worked as a Post Doctoral Research Assistant in the School of Engineering Science, University of Oxford, UK (2014-2015), under the FUTURE Electric Vehicles project, while the goal of his research was the understanding of the insulation degradation mechanisms in traction electric motors.  Morover, he worked as a Lecturer on Electrical Engineering, Coventry University, UK (2015-2019). Finally, he worked as a Lecturer on Electrical Machines, School of Engineering, University of Edinburgh, UK (2019-2022).

He has been an elected International Steering Committee Member of the conference: IEEE Symposium on Diagnostics for Electrical Machines, Power Electronics and Drives (IEEE SDEMPED) since 2020 and simultaneously was elected its Secretary. Furthermore, he serves as an Associate Editor for the scientific journals IEEE Transactions on Energy Conversion and IEEE Transactions on Industry Applications, and has served as Guest Editor in other journals as well. Additionally, he is an IEEE Senior Member and member of the following societies: IEEE IAS, IEEE IES και IEEE PELS. He regularly serves as invited Chair in IEEE Conferences and also annualy organisesSpecial Sessions in IEEE Conferences.  At the same time, he serves as regular reviewer of scientific papers for a plethora of scientifc journals and conferences in the field of electrical machines. FInally, he is a member of the Technical Chamber of Greece.

His publications record includes more than 120 papers in International scientific journals and conferences and a chapter for the book: “Diagnosis and Fault Tolerance of Electrical Machines, Power Electronics and Drives”, IET, 2018.